le document ci-dessous concerne les femmes, mais je crois que ce problème touche beaucoup de (sur)doués...le sujet ne s'adresse donc pas uniquement aux lectrices..
voici l' "abstract" de The Imposter Phenomenon in High Achieving Women: Dynamics and Therapeutic Intervention (Pauline Rose Clance & Suzanne Imes )
The term impostor phenomenon is used to designate an internal experience of intellectual phonies, which appears to be particularly prevalent and intense among a select sample of high achieving women. Certain early family dynamics and later introjection of societal sex-role stereotyping appear to contribute significantly to the development of the impostor phenomenon. Despite outstanding academic and professional accomplishments, women who experience the imposter phenomenon persists in believing that they are really not bright and have fooled anyone who thinks otherwise. Numerous achievements, which one might expect to provide ample object evidence of superior intellectual functioning, do not appear to affect the impostor belief. Four factors, which contribute to the maintenance of impostor feelings over time, are explored. Therapeutic approaches found to be effective in helping women change the impostor self-concept are described. In the past five years we have worked in individual psychotherapy, theme-centered international groups, and college classes with over 150 highly successful women -- women who have earned PhDs in various specialties, who are respected professionals in their fields, or who are students recognized for their academic excellence. However, despite their earned degrees, scholastic honors, high achievement on standardized tests, praise and professional recognition from colleagues and respected authorities, these women do not experience an internal sense of success. They consider themselves to be “impostors.” Women who experience the impostor phenomenon maintain a strong belief that they are not intelligent; in fact they are convinced that they have fooled anyone who thinks otherwise. For example, students often fantasize that they were mistakenly admitted to graduate school because of an error by the admissions committee. Numerous women graduate students state the their high examination scores are due to luck, to misgrading, or to the faulty judgment of professors. Women professionals in our sample feel over evaluated by colleagues and administrators. One women professor said, “I’m not good enough to be on the faculty here. Some mistake was made in the selection process.” Another, the chairperson of her department, said, “Obviously I’m in this position because my abilities have been overestimated.” Another women with two master’s degrees, a PhD., and numerous publications to her credit considered herself unqualified to teach remedial college classes in her field. In other words, these women find innumerable means of negating any external evidence that contradicts their belief that they are, in reality, unintelligent.∗ (...)
p. 5:
the woman continues to believe that if she were really bright she would not need outside approval. She should have internally-based confidence in her own ability. Thus, efforts to gain approval give proof that she is intellectually phony. After all, people who are geniuses or innovators in their fields manage to be productive and creative despite lack of support from others; they certainly would not resort to adaptive or placating behaviors to gain validation. To engage in such phoniness is to lack
integrity in the eyes of our clients.

The phenomenon may be further maintained in response to the negative consequences that are likely to befall the woman in our society who displays confidence in her ability. Margaret Mead (1949) has noted that the successful or independent woman "is viewed as a hostile and destructive force within society." According to Mead, a woman's femininity is called into question by her success. Martina Horner's (1972) studies support Mead's
observation that for a woman to succeed in our culture is indeed a fearsome venture. Horner indicates that many women have motive to avoid success out of a fear that they will be rejected or considered less feminine if they do succeed. Maccoby (1963) has asserted that "the girl who maintains qualities of independence and active striving (achievement-orientation) necessary for intellectual mastery defies the convention of sex-appropriate behavior and must pay a price, a price in anxiety."

Many gifted women were never identified as such, and don't appreciate their own high potential for expression in many areas. Many may also have been impaired by psychological and circumstantial factors, such as gender stereotyping, misogyny, race, dyslexia, mood disorders, cultural background and other issues that can affect self-actualization at many levels.
Commenting about some of the themes in one of her movies, Jodie Foster has commented, "Traditionally, women who excel have had to place themselves carefully, because the journey is so fraught with disrespect, not being allowed in, all the lack of acceptance, and old traditional wounds, but it doesn't have to be that way. 'Little Man Tate' is kind of about that, too: there's two women, one in some ways represents the head, one represents the heart.
"And unfortunately in our culture, women have had to choose between the two; they weren't allowed to be both, allowed to be whole, in some ways. So that little boy represents a kind of repairing of that split between the two of them, because he gets the chance to be something they were never able to be." And, she adds, "I'm hoping, of course, that all that has changed now."
One aspect of identity often related to giftedness is androgyny, a concept developed by Stanford University psychologist Sandra Bem. She does not view femininity and masculinity as opposite poles of a single continuum, but rather as parallel sets of traits. An androgynous person will have high levels of both so-called masculine traits (e.g. independence, autonomy, dominance) and feminine traits (warmth, awareness of others' feelings, expressiveness).
In her book "The Lenses of Gender" Bem argues that gender polarization can be very destructive personally and socially, and that there are many more variations of masculinity and femininity than society usually considers.
Given that calling a trait "masculine" or "feminine" is a bias, a number of psychologists and others have commented that creative people and gifted women tend to be more androgynous.
In her book "Revolution From Within" Gloria Steinem writes, "..females who are more 'androgynous' - that is, who incorporate more 'masculine' qualities along with their gender-appropriate ones - have considerably higher self-esteem than those who rate as exclusively 'feminine.' ...
"Studies of creativity make the point: creative people have both higher-than-average self-esteem and higher-than-average degrees of androgyny."
Psychologist Ellen Winner speculates in her book on the topic of exceptional children and prodigies, "Perhaps because gifted children reject mainstream values, they reject gender-stereotyped traits as well."
She refers to a study of gifted teens by psychologist Mihaly Csikszentmihaly, who found that "talented females scored highly on achievement motivation and dominance, two traits typically associated with males, and rejected traditional feminine values such as neatness."
Barbara Kerr notes "Although gifted girls were more like gifted boys in many ways, they nonetheless maintained attitudes, values and social behaviors expected of girls, perhaps to keep themselves from seeming markedly different from the norm."
This kind of protective stance is perhaps a reason some gifted girls and women may downplay their androgyny. Prof. Constance Hollinger has noted it may be anxiety producing for female adolescents to be told they can "be anything they want to be" in terms of career choices, and to face the ambiguity that they can be "both masculine and feminine."
Being outside gender norms is one of the themes of the film "Boys Don't Cry" - about the transgendered life of Teena Brandon, who chose to live as a boy.

------------------------------------------------------------------------------------
Abuse can be a factor in the inhibition of giftedness. One form is depicted in the film of writer and director Mina Shum, "Double Happiness", in which family attitudes undermine the resolve and drive of a young woman, Jade, who is struggling to become an actress. Jade's father continually says, in effect if not directly, "You're just a girl so shut up; you don't have a right to an opinion."
This sort of disrespect and erosion of esteem is of course not limited to any particular culture or group, but it may be especially destructive for the gifted, who are often hypersensitive and especially vulnerable.
Some people hold a stereotyped view of what giftedness means (as merely high IQ, for example) and feel that an identity as "gifted" is incompatible with their self-concept. Others may have a fear of failure or success related to living up to the label, or have an aversion to being thought "elitist", "superior", or "hogging all the glory" -- and they may feel guilt, shame, or other destabilizing feelings about being exceptiGifted people, having multiple talents, may have low tolerance for frustration, experience hypersensitivity to mediocrity in themselves and others, engage in misapplied perfectionism, easily get overextended, experience a deep reluctance to delegate, and project exorbitant standards onto others, especially those less gifted.
Being multi-talented may result in making vocational choices based on convenience, prestige, money and other considerations, rather than core personal values. Being gifted can lead to an overextension of personal energy, to compartmentalizing talent in order to produce rewarded results, to self-limiting career choices, lifestyles and relationships, and impoverished self-nurturing. Emotional sensitivity and intensity, more than logical choice, may direct life and career choices.
Social reactions toward women, especially those who are gifted, may be demeaning and hostile. Labels like "scattered" and "bitchy", rather than "multifaceted" and "ambitious" may result from insecurities people feel around exceptional people.
The gifted woman's family may experience strong envy and antagonism. leading to active, though perhaps unconscious, discouragement of her realizing or even pursuing her unique potentials. Hostility toward women and toward exceptional ability can lead to compromised self-confidence.
Traditional expectations for the gifted and for women are still often inconsistent, even mutually exclusive. Films and other media often reduce talented women to dependent glamour images, asexual harridans, or into invisibility. The expressions of intelligence and creativity are often not rewarded in the same ways for women, and the reward of eminence is more likely for men.

Sharon Stone has commented, "If I was just intelligent, I'd be OK.
"But I am fiercely intelligent, which most people find very threatening.

Life is a journey 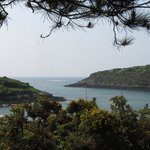